Of the roughly 850,000 single-family homes started in 2017, 58.6 percent included patios, according to NAHB tabulation of data from the Survey of Construction (SOC, conducted by the U.S. Census Bureau and partially funded by HUD). Among the outdoor features captured in the SOC, this makes patios considerably more common than decks (included on 23.8 of homes started in 2017), but not quite as common as porches (64.7 percent). 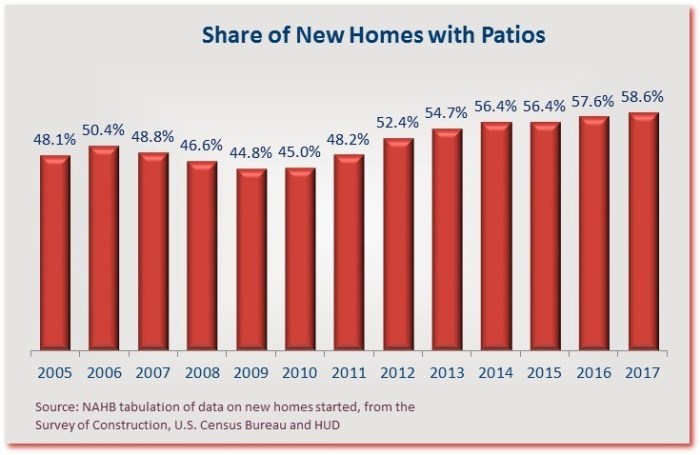 There are significant differences in the share of new homes with patios across the nine Census divisions, however. At the low end, 22 percent of new single-family homes built in the Middle Atlantic and 29 percent built in New England in 2017 had patios. At the high end, patios were included on 80 percent of new single-family homes in the West South Central and 71 percent in the Mountain divisions. As an earlier post has shown, decks on new homes are least common in the West South Central and Mountain states where patios are most common. Decks are also much more common in New England, where the incidence of patios is low, than in any other division. This makes it tempting to posit that the market views patios and decks on new homes largely as substitutes for each other. 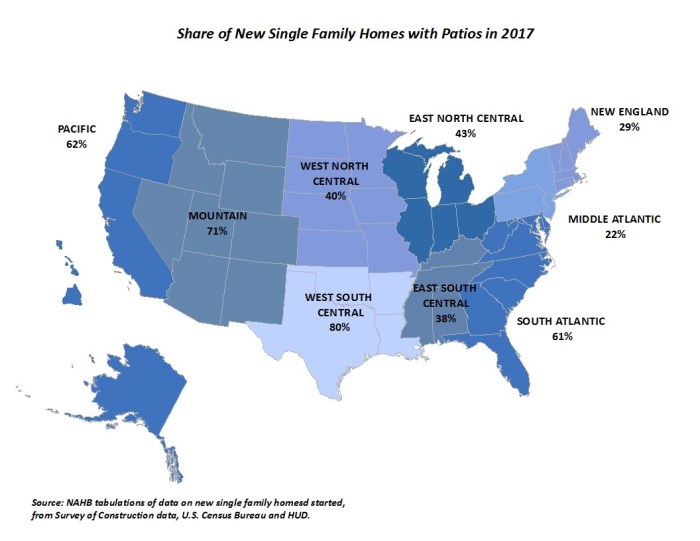 The SOC data tell us how many new homes have patios but not much about the nature of the patios. Some detail on this is available from the Annual Builder Practices Survey (BPS) conducted by Home Innovation Research Labs, however. Unlike the SOC, the BPS explicitly includes pool decks with patios.

For the U.S. as a whole, the 2018 BPS report (based on data from 2017) shows that the average size of a patio on a new single-family home is a little over 260 square feet. Patios tend to be the largest (over 370 square feet, on average) in the two divisions where they are least common (New England and the Middle Atlantic). On a square foot basis, the material builders use most often for patios is poured concrete, followed by concrete pavers, natural stone and brick pavers. Natural stone tends to be used more often in New England and the Middle Atlantic. In the West South Central, concrete pavers are used even more often than poured concrete.